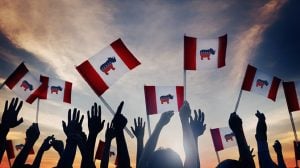 The Canadian Rhinoceros Party. Where do we begin.

Perhaps we should start at the core, with the things that really matter: their platform.

Here’s a brief excerpt of some of the historic party’s objectives:

See anything that would win your vote?

If any, or all, of those stances look like a joke to you, then good, because that’s the whole point.

(If you don’t see those stances as a joke, maybe you should join the party’s ranks.)

RELATED: Daylight Savings Could Be Eliminated In BC As Early As This Month

Originally founded in 1963, the Rhinoceros Party of Canada operated as a satirical political party all the way until 1993, even running against Pierre Trudeau, former Prime Minister and father of Justin.

The party was then reborn in 2006. Until 2010, the party called themselves “neorhino”, a nod the party’s history, as well as Neo, the character played by Keanu Reeves in The Matrix.

Elections Canada recognized the Canadian Rhinoceros Party as an official party on August 23rd, 2007, and it remains so to this day.

Another thing that has remained unchanged to this day: the party’s promise to, if elected, not keep its promises.

If that’s not honesty, I don’t know what is.

The Canadian Rhinoceros Party is well aware of the federal election, and it has no intention of sitting on the sidelines. They’re tackling all of the issues.

Their stance on national defense:

“With national defense being THE number one priority of the Rhinoceros Party, our government will take the necessary steps to modernize the Canadian military and protect our country’s interests.”

“Education being THE number one priority of the Rhinoceros Party, we are committed to eliminating waste and providing quality education to all Canadians.”

That will involve “replac[ing] teachers on leave with photos of famous scientists”, an idea so ingenious it can only be topped by their proposal on how to defeat unemployment.

“Employment being THE number one priority of the Rhinoceros Party, we are committed to doing everything we can to make life easier for Canadian workers. Citizens are asking for jobs and we will give them some! By 2020, we promise that all citizens will have a job and most will even have two.”

Of course, they also have a plan to address climate change, one of the biggest issues of our times.

“The environment being THE number one priority of the Rhinoceros Party, we will make sure [..] to tackle global warming. [A] Rhinoceros Government will force car manufacturers to build more green cars: forest green, pale green, khaki green and neon green.”

And as a cherry on top of this promise sundae, they also promise to make “Sorry” Canada’s national motto, and officially recognize illiteracy as the third official language of Canada. Surely these positions will win over many voters.

Also, one of the party’s prime candidates is named Maxime Bernier, which is great because it’s a name that’s distinct and totally different from that of People’s Party of Canada Leader Maxime Bernier.

We don’t know about you, but this is a party we can get behind.