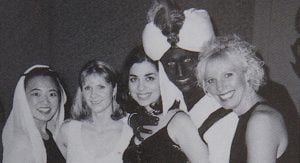 Justin Trudeau and his campaign was dealt a huge blow Wednesday night after photographs of Trudeau in brownface were uncovered.

The incident was first reported by TIME, which obtained the photograph from Michael Adamson, a Vancouver businessman from the same West Point Grey Academy community Trudeau was a part of when he was teaching in Vancouver.

Politicians, pundits, and Trudeau himself scrambled to respond to the incident. Here’s what they had to say.

“It was something that I didn’t think was racist at the time, but now I recognize it was something racist to do and I am completely sorry,” said @JustinTrudeau. “I have made a number of calls to friends and colleagues tonight and I will have many more calls to make” #cdnpoli pic.twitter.com/myhh2ehRh5

Yes, he said this. pic.twitter.com/ZuadIWCBuv

Everyone should watch this response from Jagmeet Singh. I don't think you can say it better than this pic.twitter.com/FCCXVEGgfD

Tonight is not about the Prime Minister.

It's about every young person mocked for the colour of their skin.

The child who had their turban ripped off their head.

And those reliving intense feelings of pain & hurt from past experiences of racism.

To you, I say you are loved.

My response to the Time Magazine story about Justin Trudeau: pic.twitter.com/nIfukTRiev

I am deeply shocked by the racism shown in the photograph of Justin Trudeau. He must apologize for the harm done and commit to learning and appreciating the requirement to model social justice leadership at all levels of government. In this matter he has failed.

No way Jr would appropriate someone else's culture. pic.twitter.com/cbpTMsBq3D

Overnight, a second photo of Trudeau in brownface, from the same night, was uncovered.

There is a second photo of Justin Trudeau in brownface, from the same 2001 incident. This is from the school’s newsletter (he was a teacher at the time) https://t.co/Thg7mzVcJe pic.twitter.com/YZMda2hpkU

And then, a third. Furthermore, this incident, a video, showed Trudeau in blackface.

Racism is confusing… I’m still not sure how #Blackface or #Brownface is an effective insult. I understand the outrage folks have but I don’t understand the thinking of people who do it. You hate us so much, you BECOME us?

Several years ago whilst abroad, I dressed up like 2001 Justin Trudeau, I now apologise #blackface pic.twitter.com/mU8Ol3NXz8

As of Thursday morning, #BrownFaceTrudeau, #BlackFaceTrudeau, and #TrudeauMustGo, or some version of all three, were all trending on Twitter.