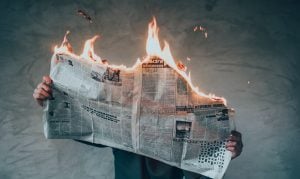 Many criticized the piece as being xenophobic, so much so that the Vancouver Sun removed the op-ed from their site. (It still went out in print.)

On the surface, Hecht’s piece may not seem obviously controversial.

“Let’s give the devil his due. Diversity, tolerance and inclusion was actually a commendable perspective”, he writes.

It’s much more polite and gentle than the Trumpian brand of xenophobia we’re used to, but there’s reason to believe it’s xenophobic nonetheless. In some parts, his op-ed even reads like the rhetoric of the Canadian Nationalist Party.

Hecht’s argument against diversity essentially boils down to the economy. “Diversity is a weakness as far as the economy is concerned”, he says.

The question then becomes: Is Hecht worried about the economy while believing that diversity is detrimental to it, or is he just against diversity and using economic reasons to argue against it?

Hecht teaches “human, political, and conservation geography” and has “written extensively on issues of national identity”, the author bio in the op-ed says.

He self-published a book titled The Rules of Invasion: Why Europeans Naturally Invaded The New World and cites the similar writings of Vancouver Sun columnist Douglas Todd as inspiration for his op-ed.

In other words, he’s not a economist. Of course, that doesn’t mean he doesn’t know what’s ailing the economy. But it does show he’s more likely coming from the angle of diversity and not economics.

Hecht’s opinion is his own. What’s more interesting is the role of the Vancouver Sun in this controversy.

When I first heard about this op-ed controversy, what came to mind was the criticism that’s often directed at the New York Times Opinions section. The criticism is that the Times often gives a platform to right-wing voices, such as climate change deniers.

Why this happens to the New York Times, in my view, is because of a general misconception of the job of journalists.

There’s a famous quote about journalism, and it goes something like this:

I’d imagine that news organizations such as the New York Times know this. The problem is that it seems like large swaths of the public don’t, believing that journalists are supposed to quote both sides and that if they don’t, it means they’re biased. (That’s the core of Donald Trump’s attacks against “the media.”)

And because perception is reality, organizations like the New York Times occasionally give right-wing voices the opportunity to write an op-ed, to counteract the public perception that they lean to the political left.

Which brings us back to the Vancouver Sun.

The Editor-in-Chief, Harold Munro, has since issued a public apology, saying that Hecht’s views do not reflect that of the publication. However, that’s not quite true.

The Vancouver Sun is owned by Postmedia, which also owns The Province, The National Post, and many other local newspapers across Canada.

Less than a month ago, Canadaland detailed the agenda of Postmedia’s CEO, Andrew MacLeod. The agenda? Shift all Postmedia papers to the political right..

Canadaland talked to several sources at Postmedia that detailed a meeting with the MacLeod. At this meeting:

“Company president Andrew MacLeod told them that their paper — which launched in 1998 to serve as the voice of thoughtful, modern Canadian conservatism, and which many would argue remains so — was insufficiently conservative.”

Suddenly, a xenophobic anti-immigration op-ed piece published in the Vancouver Sun doesn’t seem so much like an editorial oversight.

Suddenly, it doesn’t seem like a liberal publication tried to provide balance by giving right-wing values a platform.