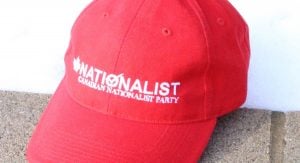 A far-right group officially known as the Canadian Nationalist Party (CNP) is on the verge of becoming an officially-recognized political party.

According to the CBC, the party became eligible to register as an official political party on Thursday, August 29th.

“Our movement represents a revival of national identity”, the official party website claims. The party was birthed in June 2017 and its website displays “Canada First” on its homepage.

U.S. President Donald Trump was inaugurated in January 2017 after winning the presidential election largely on an “America First” platform.

The party is led by Travis Patron, who commented on the news late Thursday night.

“I am very proud of what our team has accomplished thus far. We have delivered a new political option into the public consciousness of Canadians. This revival of nationalism is the only way to save our country and preserve the Canada we once knew.”

“We advocate for ethnocentricity because we believe any political stance is rooted in identity. That is, the unifying factor of a country is understood to be a common tradition, lineage, & language”, the party says.

“This is a movement based on the Christian principles inherent in the history of Canada.”

Furthermore, under its listed policies, the party proclaims that:

“We must maintain the demographic status of the current European-descended majority.”

In addition, the party makes a plea for an authoritarian government:

“We must consolidate national decisions under the vested interests of an authority above the democratic system.”

Other ideologies the party subscribes to, as listed on the party’s website, include Canadian Federalism, Christian Nationalism, British Independence, Economic Protectionism, Anti-Communism, and Anti-Zionism.

Under the Election Act, a party needs 250 supporters with listed names, as well as addresses, and also has to present one or more candidate.

An anti-hate group officially called the Canadian Anti-Hate Network has stated its intentions to identify the 250 supporters of the Canadian Nationalist Party, which the group refers to as Neo-Nazi. In a statement on Twitter, the group said:

“We have already filed our request with Elections Canada for all the documentation provided by the neo-Nazi Canadian Nationalist Party and their list of 250 confirmed supporters. Canadians have a right to know if neo-Nazis live in their communities.”

The Canadian Anti-Hate Network claims that the CNP’s views are racist.

In a video the CNP shared online, Travis Patron, the leader of the party, says that “What we need to do, perhaps more than anything, is remove these people once and for all from our country.”

He also makes reference to the “parasitic tribe”, claiming that it controls Canada’s media and central bank. The party’s official website lists “BEWARE THE PARASITIC TRIBE” beneath its “Literature” section.

Once the party is officially deemed as eligible to take part in the election, the list of 250 party supporters will become public record.

For more national and local news, stay tuned to our 604 Now’s News section.

You Might Also Like: The Racist Rant In Richmond Has Brought Out The Best, And Worst, Of Us