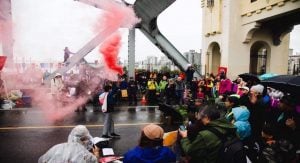 More than 100 activists occupied the Burrard Bridge Monday for over 12 hours as part of a global climate strike.

“We Rebelled!” said the event organizers on Facebook. “Thank you to … all who supported us yesterday. This is only the beginning!”

Land and water protectors, teenage climate protesters, writers and poets addressed the crowd throughout the morning.

The October protest, organized by group Extinction Rebellion, was the second global climate strike to take place in a matter of weeks.

While September’s protest took over downtown streets, activists this time around laid down in traffic lanes along the bridge, stopping all traffic and closing the bridge for the day.

And here they are in full force. At least a hundred, and they’re here to stay. Rain or no. In summary, do not try to drive on the Burrard Bridge today #ExtinctionRebellion #ClimateAction pic.twitter.com/yUNZBYX9X6

Shutting down the Burrard Bridge with @xr_vancouver . . After a brief rally, a small group of protesters who were willing to risk arrest marched to the North side of the bridge where they set up a barricade.

As a result, 10 people were arrested last night when police asked them to leave shortly after 9:30 pm.

They were arrested “after they refused to leave the bridge despite receiving several requests, and then warnings, from officers,” a police statement read.

Extinction Rebellion began in the U.K. last year and has been hosting events over the world. Similar events closed down bridges yesterday across Canada, including ones in Halifax, Edmonton and Toronto.