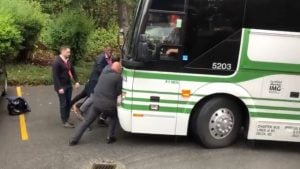 Prime Minister Justin Trudeau and his campaign hit a snag this week while he was in BC campaigning.

While in BC campaigning Tuesday afternoon, a Justin Trudeau campaign bus got stuck in a Burnaby parking lot.

Now, it doesn’t appear that Trudeau himself was on the bus at the time, but nonetheless it rang like a scene straight out of political-satire series Veep.

The bus was filled with media members at the time, many of whom had to exit and help push the bus.

A second transportation mishap for the Liberal media bus, tail scraped while turning into the Burnaby location of the Trudeau announcement on a slight incline. #elxn43 pic.twitter.com/Zf38iwAVIT

Request made for “all the strong guys” to start pushing the Liberal media bus. pic.twitter.com/ZKVvVnJEpY

RCMP now directing backlogged traffic. Two by fours are not yet working. pic.twitter.com/WD0uec8Xig

We’ll let you decipher the symbolism for yourself.

Furthermore, as Abigail Bimman of Global, who documented it all, alludes to, this actually is the second time a Trudeau campaign vehicle has had an incident in British Columbia. At least this time it wasn’t the campaign airplane.

While in Burnaby, Trudeau announced a 50% tax cut for companies working on zero-emission technologies. Later in the day, he attended a rally in Surrey.

It’s the first time Justin Trudeau was in BC since the brownface/blackface discovery that rocked his campaign. Trudeau is often in BC, taking photos with pedestrians that spot him, and has said that he views Vancouver as a second home.

As of Wednesday morning, Trudeau is currently campaigning in Delta. There have been no reports of his campaign bus hitting any more snags.