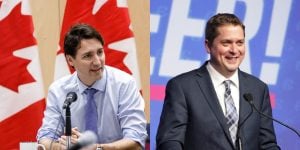 Facebook has become a huge factor in elections around the world, and new data reveals just how much the Liberals and Conservatives have spent on Facebook ads.

According to ad.watch, which acts as somewhat of a watchdog when it comes to political advertising, the Liberals have spent $738,715 on ads on Facebook, as well as Instagram, since July 1st.

In terms of impressions, the metric that measures reach, Liberals’ ad spending converted to 48 million impressions, while the Conservatives reached 16.3 million.

Meanwhile, the NDP has spent a total of $80,217, split between Party Leader Jagmeet Singh’s personal brand and the party’s.

The People’s Party of Canada, led by Maxime Bernier, has spent approximately $10,397. And in addition, both the Green Party and Bloc Québécois have spent just over $2,000.

While shocking, the gap between ad spending by the Liberals and Conservatives is not counter-intuitive.

The Liberal Party has sought to appeal to younger generations. Younger generations generally lean more liberal to begin with, more so than conservative, so these numbers are not shocking in that sense.

Prime Minister Justin Trudeau made great use of social media platforms like Facebook and Instagram during the 2015 election. Some go as far as referring to Trudeau as the “first Prime Minister of the Instagram age.”

Trudeau is well-known for posing for photos with people when he’s spotted out and about. (Like he was fairly recently here in Vancouver.) However, that tendency seems to have backfired a bit for him, in light of old photos of him donning brownface and blackface that were made public this week.