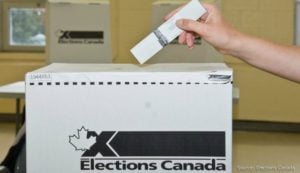 Why the heck is Federal Election Day not a national holiday?

Voting is one of the most significant things any citizen can do. It’s not a stretch to say it’s our most important civic duty.

By casting a vote, you’re participating in democracy, something we sometimes take for granted on this side of the globe. (Universal suffrage has become one of the demands at the center of the protests in Hong Kong that have been ongoing since early this summer.)

According to Elections Canada, voter turnout in the 2015 federal election was 68.3%.

But back to the question at hand.

Why Federal Election Day Should Be A National Holiday

The flip-side of that argument is if they felt like their vote did matter, they would go vote.

So why not make it feel like it matters?

Try to think of a list of important holidays, and more than likely all of them are national holidays. It’s how we know what’s serious and important (Canada Day, Thanksgiving) and what’s a little less so (April Fool’s Day, Halloween).

Secondarily, making Federal Election Day a national holiday would simply make us like it more.

The first time around might not see a huge change, but after it settles in, it’s not unreasonable to believe that it’ll result in more people voting in advance, so they’re completely free on Federal Election Day.

This also eliminates the hurdle of having to find time off of work, or school, to go vote.

While important, it’s fairly safe to say that most people do not find it “fun”, so the less hurdles, the better.