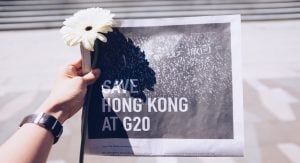 This past Sunday, a crowd of protesters gathered outside the Vancouver Art Gallery. They stood in silence, but in their hands were printed signs that read “Stand With Hong Kong at G20”, or “Save Hong Kong at G20.”

This was the second such protest in Vancouver, in less than a month, with the first coming in early June when hundreds of people from the Hong Kong community, and their supporters, marched on Vancouver’s Chinese consulate, shouting “Democracy for Hong Kong.”

RELATED: Garbage Canada Shipped To The Philippines Has Returned To BC, 6 Years Later

The “G20” refers to the Group of Twenty meetings that were being held June 28th and 29th in Osaka, Japan. The forum was attended by leaders from around the globe, including Canadian Prime Minister Justin Trudeau, U.S. President Donald Trump, and Chinese President Xi Jinping.

What those protesters, along with protesters from as many as 29 cities around the world, from New York to Berlin, from Sydney to Taipei, wanted to bring the G20’s attention to was the battle for civil liberty that was being publically litigated in Hong Kong.

This all began with a murder. In February 2018, a young couple from Hong Kong arrived in Taiwan for a romantic getaway. The woman, 20, and pregnant, would never return to Hong Kong. Her boyfriend, 19, would later confess to strangling her and stuffing her body in a suitcase that he dumped near a subway station in Taiwan.

The suspect and victim were from Hong Kong, but the crime was committed in Taiwan. Hong Kong police could not charge the man for murder, instead convicting him on money laundering charges for using the victim’s credit cards after her death.

What was just a murder case ended up leading to much more, however, when in February 2019, the Hong Kong government cited the case as justification for new legislation that would allow Hong Kong to transfer criminal suspects to countries that don’t share an extradition agreement with Hong Kong. This includes Taiwan, but also Mainland China, which was what continues to alarm many.

When Hong Kong was officially handed off of British rule back to China in 1997, the agreement in place was that the governing system Hong Kong had in place would remain so for 50 years. However, since Chinese President Xi Jinping, of the Communist Part of China, assumed office in 2012, Hong Kong has slowly seen several of their civil liberties infringed, most notably with the silencing of dissenting voices.

How This Affects Vancouver

Canada and Hong Kong have a unique relationship. Hong Kong, as of less than 10 years, is home to the most Canadian citizens in all of Asia.

Conversely, when a wave of citizens left Hong Kong after it was handed back to China, largely due to the uncertainty of Hong Kong’s future, Canada was where a significant amount of them immigrated. Where in Canada? B.C.. Where in B.C.? Vancouver.

RELATED: Bleak Times: Only 12% Of Vancouver Families Can Afford To Own a Home

This affects you because if what Hong Kong’s government proposes becomes legislation, you can travel to Hong Kong for summer vacation, unintentionally post something on social media that the Chinese government takes offense to, and be extradited to Mainland China, where the judicial system and penchant for human rights is murkier than that of North America.

These protests in Hong Kong, and Vancouver, and all over the globe, are not really about Hong Kong. They’re about democracy, human rights, and civil liberty. You don’t have to be from Hong Kong to care about that.