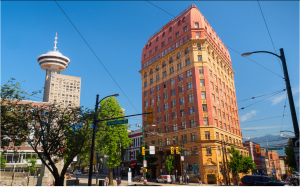 Although Vancouver is chock-full of glass skyscrapers now, our buildings don’t begin to reach the heights of others from around the globe.

For a time in the 1910’s, however, our West Coast city was the home to two of the British Empire’s tallest buildings.

While both buildings held the title for a short time, they are both still standing today!

Located on 207 West Hastings, the Dominion Building was first erected in 1910. With 13 storeys, the spot was Vancouver’s first skyscraper and cost a cool $600,000. With inflation, that is equivalent to more than $15 million. The building was named after Dominion Trust and went under just four years later in financial collapse.

But with the structure’s Beaux-Arts style and an open staircase that runs the full height of the building – it sure has added to our skyline.

The Sun Tower was originally known as the World Tower and is still standing at 100 West Pender Street. Built between 1911-1912, it quickly took over the title of the tallest building in the British Empire, due to its 17-storeys. Following the theme, architect W.T. Whiteway designed it in the beaux-arts style.

It was named by L.D. Taylor, owner of Vancouver World newspaper. Taylor sold the building to Bekins Storage, when a recession hit during the First World War. It later became the home of the Vancouver Sun newspaper from 1937-65.

During its time, the World Tower made international headlines, when the Human Fly decided to climb it. 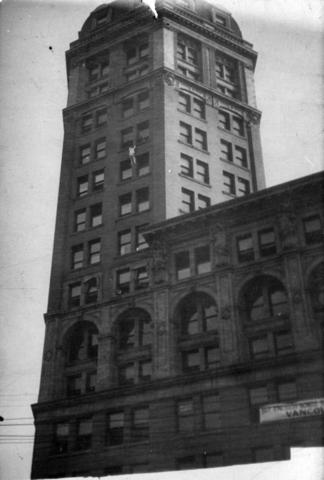 Harry Gardiner a.k.a the Human Fly was best known for climbing tall buildings without safety equipment. He had climbed more than 700 throughout Europe and North America. When Gardiner scaled the outside of the World Tower in 1918, hundreds crowded the streets to watch.

The tallest building in the world now belongs to the Burj Khalifa in Dubai. It has a height of 828 meters (compare that to the Sun Tower’s 82 meters).

Vancouver may not have two of the tallest buildings in the Empire. But they stand as heritage sites now and hold the key to a unique part of Vancouver history.

To hear other stories of our city, read about Vancouver’s massive hollow tree. Or learn about learn about how British Columbia got its name.

For more stories about Vancouver’s history, check out our History section!