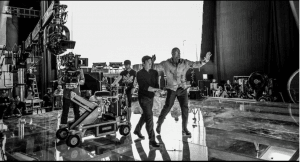 Vancouver can smell what The Rock is cooking! Pro-wrestler turned Hollywood tycoon Dwayne Johnson has had the city captivated this Fall by turning the streets into action sets and meeting fans in the middle of the night after long shoot days.

The City of Vancouver made a special “Rock Proc” declaring October 19 as Dwayne The Rock Johnson Day:

And big thanks @TheRock + team for making #Skyscraper movie in #Vancouver. 3000+ people working on set this week – phenomenal! pic.twitter.com/derbJTVu7o

There are 12 movies schedule for production around Vancouver for November 2017 including 4 feature films and 8 TV movies. Stars you can expect to see around town include Dwayne “The Rock” Johnson, Anna Kendrick, Bill Hader, Billy Eichner, Shirley MacLaine and Boyd Holbrook.

Woof! The previous film, A Dog’s Purpose, filmed around Winnipeg and was released earlier in 2017. It starred KJ Apa (Riverdale), Dennis Quaid, Josh Gad and Britt Robertson. There are currently three books in the novel series by W. Bruce Cameron who also wrote 8 Simple Rules for Dating my Teenage Daughter which was adapted into a sitcom.

Christmas comes to town Early this year as Pitch Perfect star Anna Kendrick stars in a Disney holiday movie. Kendrick will play Santa’s daughter, Nicole Claus, who has to take over the reins (and reindeer) as old Saint Nick retires.  Marc Lawrence, known for Miss Congeniality and Did You Hear About the Morgans? is the writer and director. Shirley MacLean, sister of Warren Beatty and Hollywood legend in her own right, was recently added to the cast.

There’s also a double dose of Bill’s as Bill Hader from SNL and Billy Eichner from Parks and Recreation also co-star.

Bill and Billy! Shooting a movie with Hader. He's the funniest. 🎅🎅🎅

When you’ve been up all night, they say nothing good happens at 4am. I disagree, I’ve done lots of amazing things at 4am. True, tequila was involved but still. Day 48 of 64. #BarelySurviving #OnSet #4am #SkyscraperMovie

Dwayne “The Rock” Johnson’s next big action blockbuster movie is set in China but being filmed right here in Vancouver. After some pre-production and location scouting earlier this year, principal photography for the film began shooting in August. The action-thriller also stars Neve Campbell and British Columbia’s very own Pablo Shreiber.

345am. Man on the run. Day 47 of 64 shooting our action thriller #SkyscraperMovie. Shot big sequences tonight requiring lots of moving parts. THANK YOU to the hundreds of extras putting in the hard work. Fear and terror are never fun emotions to play with – especially for 10hrs straight. Thanks again and great work. And I apologize in advance for all the extras I push and shove down the rest of the week shooting these scenes as I’m on the run. Please buy yourselves a bottle of your favorite and most expensive alcohol and send the bill to Universal Studios. #OnSet #OnTheRun #HongKong #SkyscraperMovie

#Predator2018 – 30 year Anniversary. #makepredatorgreatagain. Everyone is in for a treat.

Kentucky born fashion model and actor Boyd Holbrook is back in Vancouver for a couple weeks shooting a drama. He was in town earlier this year shooting Predator. He is also known for playing Steve Murphy in Netflix’s Narcos and Pierce in Logan.

The Hunt
AKA: Freaky Friday
Schedule: Until December 5, 2017

A number of big movies have had production date changes including:

A number of big movies wrapped up production in Vancouver last month including: