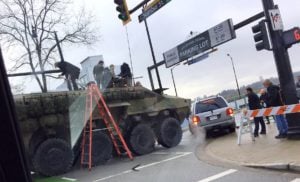 If you saw Tanks in New Westminster this morning, rest assured, Donald Trump is not coming.

Predator, one of 13 movies filming around metro Vancouver this month, caught a lot of people off guard with their production set earlier this morning.

The @Predator is filming in #NewWest this morning. https://t.co/dbiBFEG9GX #Predator pic.twitter.com/gyWKIoWAmf

Majority of the filming was seen on Columbia street and the waterfront parkade. The set included dozens of actors dressed in army attire, as well as a moving tank.

@WhatsFilming things are getting interesting here in #NewWest – notice the tank (w/man on top). pic.twitter.com/Cj6AfteLlI

#Predator filming on Columbia and the parkade! So many army people! It’s awesome!! @WhatsFilming @yvrshoots pic.twitter.com/kwu5A0HitE

Army at the #newwest parking garage!!

Predator is scheduled to film through May 15, and stars Olivia Munn, Boyd Holbrook, and local actor Jacob Tremblay. The movie is directed by Shane Black and hits the big screen on February 9, 2018.

For more news and updates about New West, visit our New Westminster homepage.