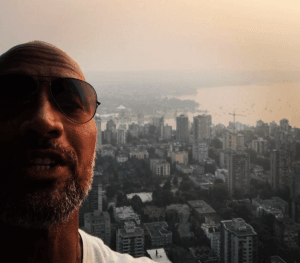 Dwayne “The Rock” Johnson is in Vancouver right now to film his latest feature film Skyscraper from August 14th to November 17th.

The proud dual citizen (Canadian/American) took to Instagram to share his love for the city and an inspirational message to fans from a downtown balcony.

Although the view from the balcony was hazy, thanks to pollution from the wildfire smoke, his message was crystal clear: “Just got to show you this view, it is spectacular, one of my favourite cities in the world – Vancouver, Canada.”

Sometimes the goal we’ve worked our ass off for years is never achieved. Then years later we look back and realize, it’s the best thing that NEVER happened.

An Inspirational Message from The Rock

After he regales fans with his Vancouver love, he explains the importance in believing in yourself. He talked about how everything works out in the end, even if it isn’t the way you imagined or dreamed it would.

The Rock went on to share that his dream was always to play in the NFL, so when he was cut from the Calgary Stampeders after playing a game against the BC Lions, things were looking dismal to him. He carried on to say that it was actually a twist of fate that brought him to where he was meant to be.

“You realize that playing in the NFL was the best thing that never happened, because it got me here, so my point is you’re going to get your ass kicked, we’re gonna get the shit kicked out of us. You’ve got to get up and have faith that the one thing you wanted to happen often times is the best thing that never happened. So have faith, just keep that mind, and keep plugging away.”

The rock previously stated in a separate Instagram post how excited he was to shoot in Vancouver and open up so many jobs for its residents.

Check out some other movies filming in Vancouver this summer.