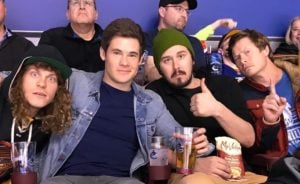 Adam, Anders, Blake and Kyle have come a long way since first sharing their wacky sketch-comedy videos on YouTube over a decade ago. Workaholics, their sitcom series on Comedy Central just wrapped up and leaves behind a The Office-like legacy. Individually they’ve also made names for themselves outside their own comedy-world, especially Adam Devine’s recurring guest role on Modern Family or character Bumper in Pitch Perfect movies.

Related: 14 Movies Filming in Vancouver This May

Now the group of 3 actors and a director take their funny bones to Netflix with the action-comedy film Game Over, Man! They’ve been filming in Vancouver throughout Spring 2017 and are scheduled to wrap up June 5th. Writing and producing partners from Vancouver, Seth Rogen and Evan Goldberg are backing the “Die Hard in a Hotel” plot as producers.

The boys have been enjoying Vancouver:

At this Canucks game it's 3rd period and they still haven't played "knuck if you buck" Vancouver get it together ?

Thanks Granville st @zumiez for showing me love today and everybody who came out to say hey! ❤️❤️❤️❤️❤️ y'all ? ?? ?

My dude @andybovine learns to steadi. Big things are happening up here in Vancouver #gameoverman

Hanging with my homies! I can't wait for you guys to see this movie. We're on some next level accidental action hero shit. #GameOverMan #netflix