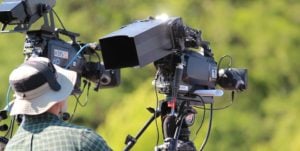 There are 14 movies shooting in and around Vancouver this May including 6 feature films and 8 television movies of the week.

RELATED: 17 TV Shows Filming in Vancouver This May

The stars and some blockbusters are in town this May and probably hoping for an end to April showers.

Eric Northman from True Blood and the Enchantress from Suicide Squad team up for this independent thriller about an amnesiac who befriends a circus sharp shooter in search of memories while staying one step ahead of a pursuer.

This gritty organized crime drama centers around a young guy who accidently kills a gangster’s brother and now has to kill off one of his own family members.

The action-comedy which stars the Mail Order Comedy group and Workaholics co-stars is being produced by locals Seth Rogen and Evan Goldberg.

Hanging with my homies! I can't wait for you guys to see this movie. We're on some next level accidental action hero shit. #GameOverMan #netflix

The @Predator is filming in #NewWest this morning. https://t.co/dbiBFEG9GX #Predator pic.twitter.com/gyWKIoWAmf

Shameless star Emmy Rossum joined the cast of this action-revenge-thriller last month which has been filming in Alberta and British Columbia. It’s a remake of In Order of Disappearance, a 2014 Norwegian film.

Some powerhouse names will be lighting up the silver screen via television movies of the week including Lori Loughlin (Full House), Maggie Lawson (Psych) and Kimberly Williams-Paisley (According to Jim, Nashville).

Are we finally getting be the much-talked about and rumored follow-up movie? The TV series also shot in Vancouver and has a fan community known as Psych-O’s. Filming for the movie takes place in Vancouver and San Francisco.

Betting on the Bride

The cast of this TV movie obviously love Vancouver:

Yes, the actress is married to country superstar Brad Paisley.

So…I roped @bradpaisley into doing disco for a good cause. Come join us! #endALZ (see link in profile)

A post shared by Kimberly Williams-Paisley (@kimberlywilliamspaisley) on Apr 14, 2017 at 3:13pm PDT

We've got a great bargain for you: seven #GarageSaleMystery movies all in one day! Saturday, August 29th on @hallmarkmovie You won't find a better deal anywhere else. And don't forget: FOUR new Garage Sale Mysteries are coming in August!

I Am Elizabeth Smart

Elizabeth Ann Smart-Gilmour who became a household name when she was abducted for 9 months as a teenager. She’s also a musician, activist and news contributor.

Today marks 14 years since I was rescued from my nine month long nightmare. I will never be able to thank everyone who helped, prayed, and sacrificed so much to help me. All I can say now is every prayer and every search made a difference. Thank you. God bless us all. #nevergiveup #miracleshappen #imtheluckiestgirlintheworld #14yearanniversary #neverstoplooking #remembereverylostchild

Schedule: May 8, 2017
Comedy based on the book by Hilary Fields.

All schedule dates are courtesy of Creative BC (CRBC) and What’sFilming (WF), subject to change.