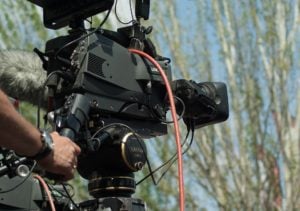 Vancouver’s television industry isn’t letting up on the gas pedal despite a rainy start to the spring or new tax credit incentives in California. There’s 17 diverse TV shows filming in and around Vancouver this May:

This highly-anticipated futuristic drama for Netflix is based on the 2002 ‘cyberpunk’ sci-fi novel of the same name. It shoots at Surrey’s new Skydance Media Studio.

Skydance Studios unveiled today in #Surrey with #AlteredCarbon crew. Thanks to the community for the warm welcome! pic.twitter.com/aoYQyVNOnA

Local production company Ghost Wars BC Productions Inc. starts shooting the first season of “Ghost Wars” in May. It’s being produced by Petros Danabassis who worked on AMC’s “Hell on Wheels” which was filmed in Alberta.

From “Seinfeld” alum Jason Alexander comes the original comedy series “Hit the Road” which AT&T Audience Network just picked up for a straight-to-series order. The first season will consist of 10 half-hour episodes and centers around a dysfunctional family headed up by Alexander.

Thanks, Ed. And here, folks, is what I’ve been developing for the last 16 months. We shoot this summer and on TV in the fall. Hope u will ❤ https://t.co/r2njf8wGHE

Another anticipated a Netflix show is the remake of the American sci-fi classic “Lost in Space” about colonists lost in space.

Vancouver’s own Thunderbird Entertainment is producing this supernatural thriller drama based on a Korean format.

Greatest country in the world. Canada ??

AND SO IT BEGINS!! First table read for Season 2 today, can’t wait to get shooting on Monday!! @beyond #beyond #season2herewecome #BEYONDexcited

Do you feel that? That warm, fuzzy feeling is the swell of electromagnetic radiation that envelopes us all. Toasty! #DirkGently

Related: Interview with The Main in The High Castle’s Quinn Lord

If you’ve ever wondered how the film crew avoids turbulence on flight scenes… #TravelersNetflix pic.twitter.com/NjG02TvZWB

Looking a little spooky on the set of #VanHelsing tonight. @yvrshoots @vanhelsingwrite Wanda and a lot of the cast filming!! pic.twitter.com/3hr9DhyNrV

Production has started at #Zoo! ?

A number of television pilots shot around Vancouver last month including “Reverie” for NBC, “Doomsday”, “The Trustee” and “The Good Doctor” for ABC and “Wisdom of the Crowd” for CBS. At least one more is scheduled and one more is rumoured to shoot this May:

A San Fran billionaire experiences a personal tragedy and takes the legal system into his own hands.

Sonny Lee brings his futuristic comedy pilot to life, backed by writing and producing partners Seth Rogen and Adam Goldberg. The local duo is also producing “Preacher” on AMC and “Future Man” on Hulu in addition to the movie Game Over, Man which is currently filming in Vancouver. Lee has produced shows such as “2 Broke Girls”, “Silicon Valley”, “The Real O’Neals” and “Girlboss”.

Singularity is set in the future when artificial intelligence surpasses human intelligence. Two shows under the Fox umbrella recently packed-up and moved production to LA for new tax incentives: Lucifer (FOX) and Legion (FX). Here’s to hoping that FX picks up Singularity and keeps it in Vancouver.

Did you know five of your favourite Vancouver-filmed adult dramas have been renewed for another season? The list includes dark comedy “Imposters” on Bravo, insider Hollywood drama “The Arrangement” on E!, fantasy drama “The Magicians” on Syfy, teen drama “Riverdale” on The CW and dark comedy “A Series of Unfortunate Events” on Netflix. Read more here.

*All schedule dates are courtesy of CreativeBC (CRBC) and What’sFilmin (WF), subject to change.