Calling Viv Leacock a busy local actor would be an understatement. He’s had a busy year of working on different projects on Vancouver sets, which means he can be seen on more than one channel this fall season.

He plays one of the 4 supernatural beings in The Rowdy 3 group on BBC America’s “Dirk Gently’s Holistic Detective Agency” (yes their math is not very good). He can also be seen in The CW’s new sci-fi drama “Frequency” and on “Hallmark Channel’s Hailey Dean Mystery: Murder With Love”. In January he can be seen in ABC’s “When We Rise”.

That’s a whole lot of Viv Leacock on TV! We chatted with him about his career and the different Vancouver productions he’s apart of: 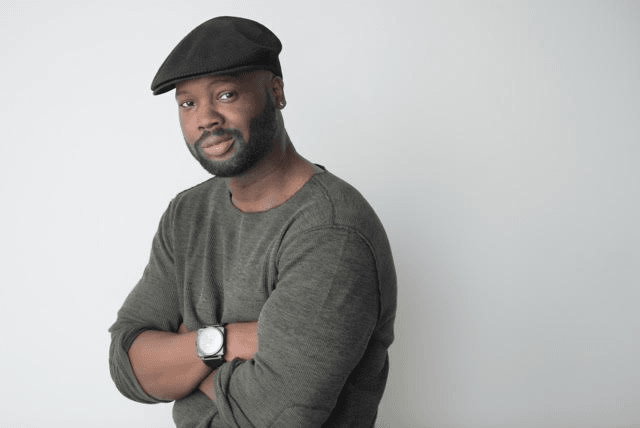 What was it like to bring life to Nancy Grace’s murder mystery “Hailey Dean” on the Hallmark Channel?

I had a lot of fun playing Fincher and I really enjoyed working alongside Kelly Martin, aka “Hailey Dean” especially because we bonded over our mutual affection for Lethal Weapon movies, specifically, Lethal Weapon 2. So, in Hailey Dean, that’s our version of “Riggs and Murtaugh”.

How do you get into the mind frame of Chester, a dirty cop with a guilty conscience’ in CW’s “Frequency”?

I knew that Chester had children and as a father of 3 kids, I would do anything to keep them safe.

Do you share any traits with your vampire character Gripps in BBC America’s “Dirk Gently’s Holistic Detective Agency”?

As a kid, I was a “hit first, ask questions later” type of person much like Gripps is. I grew out of that but Gripps didn’t. We are both fiercely protective of people that we care about. Gripps is a supernatural being and as such, he is incredibly strong – I wish I shared that trait with him.

What was it like to be a part of the star-studded and dramatic ABC mini-series “When We Rise” which airs in January? Why is the story so important?

It was exciting to know I was in the company of so many amazing actors. Every member of this production was incredibly proud to work on it. This definitely struck a chord with me…it wasn’t so long ago that African-Americans were fighting for the same rights as the characters depicted in this mini-series and as we’ve come to see there is still a huge divide when it comes to equal rights for everyone. Even if this project helps just one person understand that their fear and hatred was misplaced, then it has done its job.

What’s it like to be able to work on so many local television productions?

I love what I do and it’s a lot of fun. It feels like a 2nd family when I get to set since I know 99% of the people. Also, not having travel too far away from my wife and kids makes it easier.

With over 90 film & television appearances, which roles or projects are most memorable for you?

“I Spy” with Eddie Murphy was most memorable as it gave me the opportunity to work alongside my idol including the director, Betty Thomas and Owen Wilson.

I will never forget the phone call from my agent at 7am on Saturday, May 21st telling me that I booked the role on Dirk Gently’s Holistic Detective Agency. The show’s creator and director, Max Landis is the son of legendary director, John Landis – who is responsible for some of Eddie Murphy’s biggest movies including Trading Places and Coming to America. The slogan for Dirk Gently is “everything is connected”.

How do you balance an acting career with your family life?

I have a great partnership with my wife. We have built a strong foundation over the course of 23 years together. It hasn’t been an easy road but we respect and support each other’s work and interests. We’re on the same page with most things and we like things simple. I can function on a higher level when I know that my wife and kids are happy.