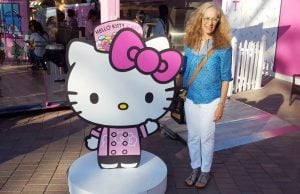 Sandy Rogen isn’t just married to Mark and mother to Seth and Danya, she’s a bonafied must-follow on Twitter and celebrity in her own right. In her spare time the social worker helps promote her son’s movies and even embarrasses him a little via social media. MTV has dubbed the hilarious mom as a “low-key queen of Twitter” while Buzzfeed has said she’s the only handle worth following.

Funniness must run in the Canadian-American family. Seth was born in Vancouver and started his stand-up comedy career in the 90’s. He also had a role on Freaks and Geeks and was a staff writer on Da Ali G Show. Rogen then pushed into films by Judd Apatow like The 40-Year-Old Virgin, Knocked Up and Funny People.

This year Seth dived back into television land as executive producer and writer for Preacher on AMC and released the adult animated comedy Sausage Party. He has a film production company with comedy partner Evan Goldberg.

In airport bathroom, put coffee on floor and phone on shelf. Phone fell onto coffee and spilt on floor. Coffee everywhere! I wiped it up .

I don’t get it pic.twitter.com/UIFxYk6Bw2

Why is it ,in clothes I look good, but in my underwear only , I look really horrible?

Is there some new style to wear your t- shirt inside out?

3 yr old grandson to me, ” nana does grandpa have a penis” .? I love that he is asking me.

Saw x men apocalypse. Well I really have no idea why or what happened!

Wine after yoga with yogis is good! Or just at home, whenever…..

Cannabis and yoga ! Vancouver. What else do you need? pic.twitter.com/gOn52KnLHW

So if you are at the gym and your earphones are in, and you fart, does that mean that nobody can hear it?