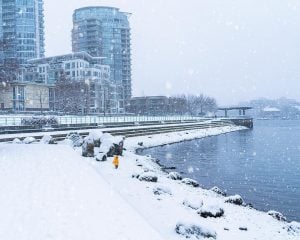 In fact, seven places in the province broke records, according to Environment and Climate Change Canada (ECCC).

RELATED: While We Fought The Snow, Alberta Made A 23-Ft Snowman With A Trackhoe

Other places include Puntzi Mountain in the Cariboo which experienced -48.8 degrees Wednesday. The coldest it has been there since, was in 2005 at -37.4 degrees.

Prince George and Burns Lake also broke the previous record of -41 degrees, compared to -44 this week.

And Vancouver’s snow storms also put the city on the map for its cold temperatures.

Meanwhile, Wednesday was the “wind chilliest” it’s been since on a January 15th since records began for that in 1953.

🥇With an avg windchill of -11.7, yesterday was #Vancouver's windchilliest Jan 15th since records began in 1953. #YvrWx pic.twitter.com/bkqEIGuryQ

This is to say that whether it be the amount of snow or the sub-zero temperatures, this week was one that we’ll likely remember.

It wasn’t exactly a jolly time for commuters, but at least the dogs had fun.