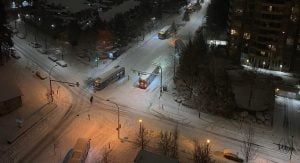 Metro Vancouver has been hit with a decent amount of snow within the last week, and it’s been pretty hectic, as these six stranded TransLink buses have shown.

A photo posted to Reddit, by u/_boobytrap, on Monday showed quite an interesting scene on the intersection of Edmonds St. and Salisbury Ave. in Burnaby, on Sunday evening.

The photo shows not one, not two, not three, not four, not five, but six TransLink buses on the road, all seemingly stuck and stranded.

Three of the buses are heading in one direction, while the other three are going the other. (One is partially obscured by the treeline on the right side of the road.)

RELATED: Everything You Need To Know About TransLink’s New RapidBus Service

In early December, TransLink revealed multiple new initiatives as part of their Winter Preparedness Plan. One new thing on that list is “tire sock improvements”, which are are supposed to give buses more traction, and the “improvements” are supposed to improve the durability of the tire socks, which was a problem back in 2018.