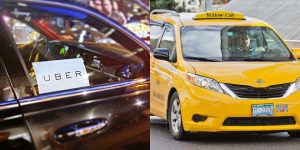 The war between the City of Surrey, specifically Mayor Doug McCallum, and ride-hailing companies Uber and Lyft continues to escalate, but it’s not exactly out of the blue.

This week alone saw Surrey file an injunction seeking to get Uber and Lyft off the roads. The City of Surrey also threatened to fine Uber drivers $500 a day if they continued operating in Surrey. Uber soon responded by filing an injunction of their own.

Here’s a timeline of what led up to this week’s exchange:

The City of Surrey vs. Uber & Lyft

October 10, 2018: At a Surrey mayoral candidate debate, the candidates were asked what they would do to bring ride-hailing companies to Surrey. McCallum responded saying: “I’ve been very clear when I was mayor, and I’ve been very clear over the years … I don’t support Uber at all.”

January 28, 2019: The BC Minister of Transportation Claire Trevena says Mayor McCallum’s opposition to ride-hailing is something he’ll “have to work through.”

August 12, 2019: Lyft announces its intentions to operate in Metro Vancouver.

August 28, 2019: Uber announces its intentions to operate in Metro Vancouver.

August 28, 2019: Mayor McCallum releases a statement reiterating his stance against ride-hailing. “My position has remained consistent for years: I do not support ride-hailing”, he said.

September 10, 2019: The B.C. Ministry of Transportation releases a statement saying that the City of Surrey cannot prevent ride-hailing companies from operating.

October 31, 2019: The BC Passenger Transportation Board informs Uber and Lyft to expect delays due to the judicial reviews filed in September.

January 23, 2020: The BC Passenger Transportation Board officially approves Uber and Lyft to begin operating in Metro Vancouver.

January 24, 2020: Uber and Lyft both launch operations the morning after receiving official approval.

January 26, 2020: An Uber driver is tricked into picking up a rider in Surrey and gets ticketed.

January 28, 2020: Taxi companies file an injunction in BC Supreme Court seeking to get Uber and Lyft off the road.

January 29, 2020: Uber responds to the injunction, as well as City of Surrey threats to fine drivers $500 a day, with one of their own.

This war is ongoing, with a hearing on the injunction filed by taxi companies expected on Tuesday, February 4th. Check back here for further updates.