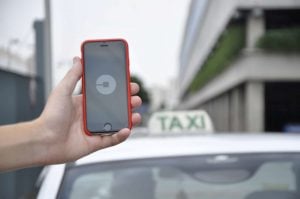 Uber began its services this past weekend, but not everyone is happy about it – least of all, the Mayor of Surrey.

Mayor Doug McCallum is trying to outlaw Uber and Lyft services in the suburb, while City Council has yet to offer an official stance on the subject.

RELATED: Uber Comes To Vancouver Just As Its Reputation Reaches A Nadir

“Until a decision is made on this regard, ride-hailing companies are precluded from operating within Surrey’s boundaries,” said Rob Costanzo, general manager of corporate services for the City of Surrey, in a statement.

After Uber received a request to cease operations in Surrey, the company responded to the request, saying: “We respectfully decline.”

Uber also noted that “no other city is taking this approach.”

Uber’s head of Western Canada, Michael van Hemmen, said the company has all licenses to operate through Metro Vancouver. That includes Surrey.

The city’s, and Mayor McCallum’s, stance against ride-hailing has remained combative since this past summer, when Uber and Lyft first announced their operations in British Columbia.

Meanwhile, an Uber driver received a ticket this weekend, Vancouver’s first with ride-hailing, after accepting a ride request from YVR Airport to Surrey. During that trip, the driver, Carlos Altamirano Medina, got another request on King George.

When the driver approached the customer, they asked if he was Carlos. And as soon as he said yes, two bylaw officers told him they were from the City of Surrey. They said he didn’t have a licence to operate in Surrey and gave him a warning notice.

The officers said Altamirano Medina can drop passengers off in Surrey, but couldn’t start new trips there.

“Premier Horgan has been clear that municipalities do not have the authority to prevent ridesharing companies from operating,” van Hemmen said in an email to CTV News.

McCallum said he is against the ride share services because it gives unfair competition to taxi drivers. McCallum’s stance has received its share of criticism, but Uber and Lyft’s first weekend here in Vancouver did not exactly instill much confidence in supporters.