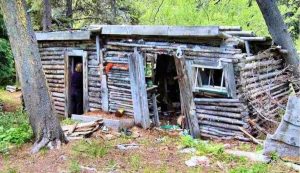 Escape to a lesser-known part of the province known as Blakeburn.

The Blakeburn Site is now a ghost town but it once was a coal mining community just southwest of Granite Creek and the Tulameen River.

The abandoned village is situated above the surviving mining town of Coalmont.

It was once the railhead for the Blakeburn Mine Railway, connecting it to the now abandoned Kettle Valley Railway.

Blakeburn was named after William John “Blake” Wilson, the President of Coalmont Collieries Ltd. in 1923.

The town was home to more than 500 people at its peak. It had a school, community hall, two churches, several homes, tennis courts and an ice rink.

Forty-five people were killed there in 1930, when a lightning storm caused an explosion in the area. The mine reopened the following year and coal operation continued for another decade. But in 1940, it was shut down for economic reasons.

A few structures are still standing—making it a cool spot to check out while on a road trip.

There are a number of other stops to make while down in the Similkameen Valley, including the villages of Coalmont and Tulameen—just outside of Princeton.

These spots are perfect for people who just want to get away and explore an area that is more off the beaten path.

Coalmont is about 20 minutes northwest of Princeton and has a population of about 100 people. The quaint town is known for its impressive outdoor recreational activities, especially fishing.

Tulameen is a 12 or so minute drive northwest of Coalmont. It’s slightly larger and has about 250 permanent residents. The charming town is a great place to relax and go for a scenic stroll around the serene Otter Lake.

Where: Near the Tulameen River and Coalmont, just outside of Princeton

For more places to visit in beautiful BC, check out our Travel & Outdoors section.