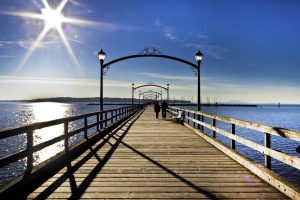 After being closed to the public for two and a half months, the White Rock Pier has officially reopened.

White Rock City council made the decision during their council meeting on Monday night.

The pier was originally closed on March 24.

City council reacted quick to close the pier, parkades and promenade to prevent the spread of COVID-19. Since then, it’s been carefully reopening the waterfront attraction and monitoring activity – a trend that’s likely to continue given the popularity of the pier.

In the event of overcrowding, the City isn’t ruling out the idea of re-closing the pier.

Overall, the decision is expected to help boost business for the restaurants and hotels along the Marine Drive waterfront. With the border closure extended another month and lack of foot traffic in the area, many businesses have been struggling to stay afloat.

City council is also considering the idea of letting people drink in designated areas around the beach – an idea recently approved in both Port Coquitlam and North Vancouver. The City of Vancouver is also making similar considerations.

For more local stories, head to our News section.