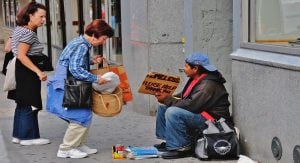 Some may rethink panhandling in Maple Ridge, as the city approved tight restrictions, as part of the “Safer Streets Bylaw.”

Maple Ridge has joined other B.C. cities in creating restrictions to make the city feel safer.

Anyone breaking those rules is subject to a $100 fine.

The restriction was put in place as a way to help fight a growing homeless population.

“This was not about punishment, this was about ensuring that we use this as an opportunity to get people the help that they need,” said Mayor Mike Morden, during the October council meeting.

When the vote came up Tuesday, councillor Kiersten Duncan, was the only one who opposed. She said it will only further stigmatize the homeless population.

“Regulating it and making it more challenging for people to panhandle isn’t going to change the situation,” she said.

Counsellor Gordy Robson said panhandlers use the money for drugs, rather than food or shelter, so allowing them to panhandle isn’t helping the situation.

“There’s no way that anybody can legitimately claim these people are doing it to survive,” he said. “They’re doing it to help kill themselves.”

Councillor Judy Dueck, who also voted in favour of the bylaw, said it was all about safety.

“This is about ensuring that people feel safe going in and around businesses,” she said.

Maple Ridge is the only city in Metro Vancouver who instated strict bylaws on panhandling, but other places in B.C. have done so recently. That includes Penticton, Quesnel and Salmon Arm.