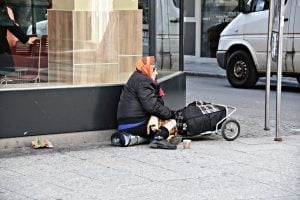 Back in May, Penticton City Council voted to amend the Good Neighbourhood Bylaw, which now prohibits individuals from sitting or sleeping on a number of city streets. Earlier this week, another BC city followed in their footsteps.

This bylaw amendment, which passed Monday, is aimed to combat people who sit or lie on the streets for the purpose of getting money.

Back in May, a bylaw was passed in Salmon Arm, which made it an offence to panhandle from anyone while sitting or lying on the streets, within 15 metres of a bank machine, in a car, or within a public plaza.

The report also highlights that handing out fines will be used as a “last resort”.

“The primary method of achieving compliance will be education followed by a request for compliance”, reads the report.

If the offense continues, the bylaw officer would then issue a verbal warning, which could be followed by a written demand notification. City staff’s last resort would be the issuance of a municipal ticket.