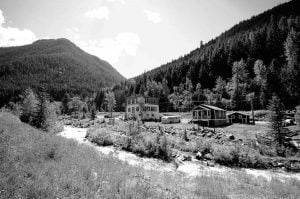 Beautiful British Columbia also has some creepy places scattered throughout the province. One of which is called the ‘Valley of the Ghosts.’

You can find this ghost town (if you dare) in the West Kootenay region. It’s nestled deep in the rugged mountainous terrain where not many people actually know it even exists. The Kootenay Lake is located just east of it, with Slocan Lake to the west.

RELATED: This Mansion Is Considered One Of The Most Haunted Places In Vancouver

What was once a lively spot for pioneer silver prospectors and entrepreneurs—now sits completely vacant. Its mysterious allure makes it one of Canada’s most famed ghost towns.

The city of Sandon was known as being the heart of the valley. It was a city that was home to around 5,000 miners along with their families. When the silver markets crashed, it caused the residents to flee the area, leaving behind the abandoned town we know today.

Currently, all of the towns and camps that once existed still lay there in ruins. People say the ghosts took over, leaving it to be just a valley of ghosts.

For more of BC’s creepy places, take a road trip to these deserted towns and learn about their haunted past.