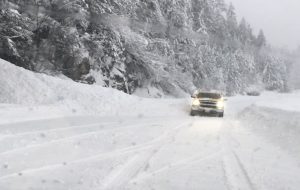 As Vancouver plowed through 2020’s first week of snow, the city faced the “storm of the century” in 1996.

It was on December 28 and 29 of that year when Vancouver was hit with 44 cm of snow.

Highway 1 and transit routes all stopped due to the Vancouver storm. Crews had to quickly clean up the roof of B.C. Stadium as people noticed it started to sag.

They even cancelled a Canucks game against San Jose Sharks in Vancouver.

YVR airport cancelled most flights because de-icing crews couldn’t keep up. By the time crew cleaned up one side of the airplane, the other side was covered again.

But for those in Victoria, B.C. it was even worse.

People opened their doors to a wall of snow, as 65 cm fell on December 29th alone. Within two days, it accumulated 77.7 cm – almost double Vancouver’s amount.

On December 30, the weight of the snow and rain caused an airplane hangar roof to collapse at Victoria International Airport. It destroyed several airplanes and put 80 employees out of work.

Victoria didn’t have the resources to deal with the snow, so they actually had to call in the military.

Bruce Kirkpatrick, a CHEK news reporter, said “it was an out-of-this-world experience.”

Everyone in Kirkpatrick’s neighbourhood was given a shovel to dig in. He mentioned that it brought the community together.

“What stood out to me was the public’s involvement. You know there were ambulances stuck and people were out pushing them,” he said to CBC.

While everyone who remembers likely hopes to never experience that again, there’s always a silver lining.

“You get to know your neighbours really well in a snowstorm,” Kirkpatrick said.

For more stories about BC’s history, check out our History section!