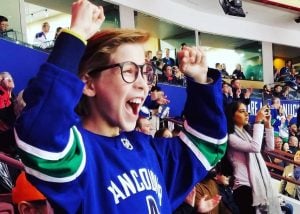 Sometimes Hollywood stars are closer to home than you think. Vancouver is hometown to some of the world’s biggest names like Ryan Reynolds and Michael Buble. A number of recognizable faces have found work in their hometown as they are currently starring or guest starring in some Vancouver-filmed TV shows.

Writer, actor and producer Seth Rogen is set to star in an episode of Jordan Peele’s The Twilight Zone revival. The highly-anticipated anthology series already has an impressive list of guest stars that includes John Cho, Steven Yuen, Adam Scott, Kumail Nanjiani and another local star Jacob Tremblay. It premieres on April 1 on CBS All Access.

Vancouverites already know Rogen is a huge fan of local cuisine as he’s shared his love for the Richmond Nightmarket. He’s already been spotted around town a few times earlier this year:

Just a couple of Canadian Good Boys! We got something coming & I think you're gonna like it… 🤫✌

Langley boy turned Hollywood star Jacob Tremblay is starring in multiple episodes of The Twilight Zone. He’s filmed a lot of big hits in Vancouver over the years including Wonder with Julia Roberts and Predator with Olivia Munn.

He’ll be appearing alongside fellow local actor Seth Rogen in an upcoming episode of The Twilight Zone. The two are well acquainted as Tremblay starred in a Rogen produced R-rated teen comedy Good Boys which filmed in Vancouver last year.

Vancouver-born actress, singer and dancer Sarah Jeffery has had a blossoming career over the last few years. She starred in the locally filmed Wayward Pines series and then went onto play Jennifer Lopez’s daughter in Shades of Blue.

She know has a lead role in the magical reboot of Charmed which films in her hometown. Jeffery who plays Maggie Vera, one of the three witch sisters, will be turning 23 on April 3.

feel like I’m running on empty lately. It’s ok, I’ve got my dog to stand by me… he likes to chew my sneakers. Still, I want to tell him “I love you to death!” ok this is a ridiculous caption

How I Met Your Mother and Avengers star Cobie Smulders (who shares a birthday with the above mentioned Sarah Jeffery) is back in town for another project! She filmed a movie here in 2016 with none other than the Arnold Schwarzenegger. The action comedy Why We’re Killing Gunther was written and directed by Smulder’s husband and SNL alum Taran Killam.

Now she’s back home for an ABC pilot called Stumptown. It’s scheduled to film in Vancouver from March 11. Fingers crossed it gets picked up and we see her back on the small screen!

Victoria-born Drew Ray Tanner is most recognized for his role of Fangs in the locally filmed Riverdale series. The third season of Riverdale is scheduled to shoot until April 4.

Just this month, Riverdale star and mentor Luke Perry passed away from a massive stroke. Amidst the loss, production of Riverdale was temporarily suspended and his peers paid tribute to him online.

Another local actor who stars in Riverdale is Jordan Connor aka Sweet Pea. He was born in Calgary but moved further West as a child. He also shared his mourning of Luke Perry’s passing.

Cue the Geto Boys… It’s time to destroy some printers!

You lit up those around you and because of you the world is a brighter place. Thank you Luke. From the bottom of my heart, thank you.

“The day we met, we spoke to each other about love and about sharing love with others. We talked about how important it is to be grateful to those who have helped us and how it matters when you show them your gratitude. How important it is to be kind and caring. That it truly does make a difference. We talked about baseball. I’ll never forget that. I’ll never forget how you made everyone around you smile, with a handshake or a hug or a simple pat on the back. You lit up those around you and because of you the world is a brighter place. Thank you Luke. From the bottom of my heart, thank you. Rest In Peace.” @thejordanconnor

27-year-old Emily Bett Rickards aka Felicity Smoak on CW’s Arrow is also a Vancouver native. Arrow is filming its seventh season in town until April 18. It was just announced that the following eight season will be the show’s last. It has already spawned spin offs like The Flash, Legends of Tomorrow and Supergirl – which all also film in Vancouver!

Established Canadian actor Christopher Heyerdahl was born in BC and has found lots of work locally over the years. He’s starred in Vancouver-filmed movies and TV shows like Stargate Atlantis and The Twilight Saga.

More recently he is known for his role of Swede in Hell on Wheels and currenty as Sam in Ven Helsing – which films locally. The fourth season of Van Helsing films in town until June 4.

Matthew Good of the Matthew Good Band is on his first solo acoustic tour since 2007. He plays Vogue Theatre on March 23 and 24.

Did you know both Matthew Good and Michael Buble were born in Burnaby?

Vancouver-based pop rock band plays a hometown crowd at Orpheum Theatre on March 29 and 30. They formed back in 2001 and have won multiple MMVA’s.