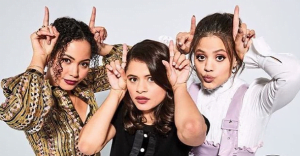 Sundays are going to get magical when the CW’s reboot Charmed series premieres on October 14th. The supernatural and fantasy drama films in and around Vancouver from August until December having successfully shot its pilot in town in the spring.

The original series ran from 1998 for eight seasons and starred Shannen Doherty, Holly Marie Combs, Alyssa Milano and Rose McGowan. 20 years later, the new show follows new characters and another trio of witch sisters, or The Charmed Ones, that possess The Power of Three. In this new imagining one of the sisters is a Lesbian and another is played by a Vancouver actress!

Nothing is stronger than the sisterhood. #Charmed is coming Sundays this fall to The CW! Click the link in our bio to watch an extended first look!

The Book Of Shadows… is here. #charmed2018 #whitelighter

We did it!!! Comic Con, thankyou for welcoming us so warmly. Can’t wait for you to get to know Maggie, Mel, Macy and the rest of our wonderful characters. I really do love these girls 💜😽✨

Put a spell on you ✨

Check out the Charmed cast:

as Maggie, the youngest half-sister

From J-Lo’s daughter in Shades of Blue to starring in the Charmed reboot right here in her hometown, Sarah Jeffery is on the rise! She also previously had a role in Wayward Pines which was filmed locally too.

as Mel, the middle half-sister

as Macy, the eldest half-sister

as Harry, the sisters’ Whitelighter (or guardian angel / witch guide)

as Galvin, a biologist who works with Macy

So Excited to represent @thecw and @cw_charmed at Television Critic's Association today. Thank you @tvguidemagazine @tvinsider and @iheartmaarten for the 📸 #Charmed #sunday #October14 9pm

as Brian, the love-interest of Maggie

Watermelon was made for summer