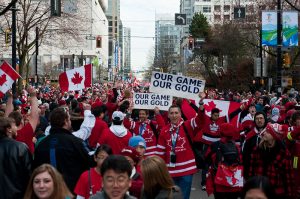 When Vancouver hosted the 2010 Olympics, the city drank so much beer, we outmatched other Winter Olympic cities.

During the 16-day event, vendors set up pop-up shops that hosted music, food and beer. German House was one of the most popular, with a large tent posted in a downtown parking lot.

But the owners were not anticipating just how popular it was. They were running out of beer three days in and had to send for 300 kegs of emergency beer. But even that wasn’t enough.

“In the evening, we have problems with the young Canadians to dance on the tables,” the house manager told CTV News in 2010.

Vancouver also broke records during the Olympics for the overwhelming number of transit rides. If you’re looking for things to do to celebrate the Olympics anniversary, check out our guide.