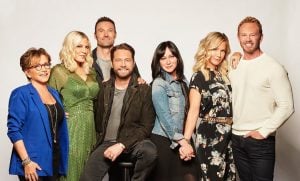 June is booming for television and web series production in Vancouver! There’s a mix of shows underway in town for prime time networks, cable channels and streaming services.

Keep your eyes peeled for some new limited series in town like the reboot of Are You Afraid of the Dark and BH90210 – aka another Beverley Hills, 90210 show!

Plus your returning favourites are back filming in town like The Good Doctor, Altered Carbon and Van Helsing and Chilling Adventures of Sabrina.

The stars are in town this month filming some exciting television and streaming shows like Anthony Mackie in Altered Carbon, Kiernan Shipka in Chilling Adventures of Sabrina, Ray Romano in Get Shorty.

Oh, and not to mention the cast of Beverly Hills, 90210 is filming a six-episode limited series in town! The gang is back including Shannen Doherty, Jennie Garth, Brian Austin Green,Tori Spelling, Ian Ziering, Gabrielle Carteris and North Vancouver’s own Jason Priestley. Cast-member Luke Perry passed away earlier this year as the result of suffering from a massive stroke. He played Fred Andrews on CW’s Riverdale which films in town.

New Sleeves incoming – and some popular models back in stock. #alteredcarbon

Season 1 of #AMillionLittleThings is Streaming Now and On Demand.

Are You Afraid of the Dark?

Submitted for the approval of the Midnight Society… popular kids horror-fantasy anthology series Are You Afraid of the Dark? is getting a reboot! The staple 90’s childhood YTV program is being brought back by Nickelodeon for a limited miniseries event to air this October. It films in town from June 10 to July 19.

Submitted for the approval of the Midnight Society, I call this story, The Return of Are You Afraid of The Dark?https://t.co/BywsdFaI6D

Read more: Nostalgia Alert! Are You Afraid of the Dark? Reboot is Filming in Vancouver

The Beverly Hills, 90210 franchise continues with its sixth iteration. This time fans can look forward to a “mockumentary” style fiction titled BH90210 which follows the stars as they try to get the show re-launched. The six-episode limited series airs on Fox on August 7.

Everybody Loves Raymond’s Ray Romano and This Is 40’s Chris O’Dowd are filming the third season of Epix’s adaption of Get Shorty in town.

Read more: Everybody Loves Raymond star is filming in Vancouver

Get Shorty has been renewed for a third season. 💪👏 #GetShorty pic.twitter.com/PsDX8mYC5t

ABC’s hit medical drama The Good Doctor continues with its third season. It’s based on a South Korean series of the same name and is produced by Daniel Dae Kim. It stars British actor Freddie Highmore who is no stranger to Vancouver having filmed Bates Motel here.

The Healing Powers of Dude

Netflix broke barriers as it launched a worldwide casting call for a disabled actor for a disabled role. The lead character is a  wheelchair user, female and aged 9-13.

Kelly Overton is back as Vanessa Helsing in the fourth season of Van Helsing.

Victoria, BC’s Priscilla Faia stars as Izzy in this comedy-drama about a three-way relationship. She also starred in Rookie Blue.

Those faces do not say “happy throuple” right now 🧐 #YouMeHer

Last month AMC’s horror anthology The Terror wrapped up its second season. It featured George Takei who starred and consulted on the project.Takei has been spotted several times recently in Burnaby, Vancouver, and on the Skytrain.

Ladner’s Will Sasso (MADtv) and Rob Livingston star in this comedy series for Audience Network.

There may be two sides to every story, but one thing is certain: Season 2 of #ProjectBlueBook is coming soon.

Hilary Swank is on a mission to Mars (or at least Vancouver) in Netflix’s new space drama series.

Ever wondered what goes on in the writers’ room? 🤔 Lucky for you, the writers of #SacredLies are going LIVE on Facebook now! https://t.co/YQKUv7jk2h pic.twitter.com/5wsnt75KE4