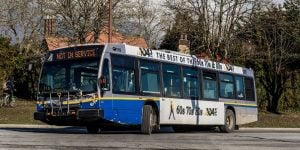 “The company is showing little respect for the difficult working conditions that our members must face every day”, Unifor National President Jerry Dias said in a news release.

If an agreement is not reached by Thursday at midnight, job action would commence in the form of a strike. Transit is expected to be affected.

During the strike vote on Thursday October 10th, a stifling 99% of Metro Vancouver bus drivers voted in favour of a strike.

The strike would commence sometime in the next 90 days, but the union must give 72 hours notice before it happens. The next meeting to negotiate terms will take place on October 15th.

Due to low wages and insufficient breaks, Translink bus drivers may go on strike soon.

The union of Metro Vancouver bus drivers is holding a vote on Thursday, October 10th to decide whether or not to strike.

“Right now, we’re hoping to get the support of our members, get that mandate and return to negotiations to see if we can work out the issues,” said Unifor director Gavin McGarrigle to CBC.

TransLink employees are asking the company to hire more bus drivers, after boarding 437.4 million passengers in 2018, a record-high number. Overall, there was an increase of 36% in overcrowded bus trips from 2016 to 2018, states the George Straight.

This has resulted in overworked drivers, who often lack decent breaks because of it.

“They don’t have sufficient time to recover and rest between trips so that they can eat something and go to the bathroom and really just reset themselves,” said McGarrigle to CBC.

Other issues up for discussion are better wages and benefits.

The last time a TransLink strike took place was in 2001, which lasted nearly four months before drivers were ordered to return to work.

Once this latest vote takes place next week, the union must give 72 hours notice prior to a strike. But with a transit expansion looming, McGarrigle said the time to negotiate is now.