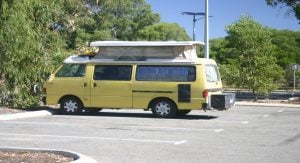 The City of Surrey may ban sleeping overnight in RVs and camper vans in a new bylaw, proposed earlier this week.

The bylaw would make it illegal for people to sleep in their camper van on Surrey roads between 6pm-10am.

“The City periodically receives complaints related to Large Vehicles parked overnight on City roads,” the report reads. “The complaints typically originate from residents and businesses and relate to the impacts on available parking for residents, staff and customers.”

Those vehicles would not be able to park in public areas for more than three hours within that time frame.

In Vancouver, a ban on sleeping in camper vans is already in effect. However, it is not common to ticket people breaking the rule.

That would likely be the case with Surrey, where councillors said ticketing, towing or impounding would be a last resort.

The ban is meant to encourage people to move into better housing, said city council. (This comes as home break-ins Surrey are occurring more frequently.)

But sleeping in vehicles comes down to a lack of housing, said Mike Musgrove, executive director of the Surrey Urban Mission, to CBC.

“There’s no housing available. And people are trying to be creative about how they exist and live,” he said. “I would assume that if someone’s living in a camper van that they’ve exhausted their opportunities.”

The council first met to discuss the bylaw Monday, but have decided to delay its decision and send it back to staff for further consideration.

A decision will be made at a later date.