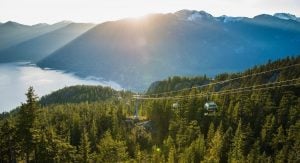 After suspicions were raised, the RCMP has confirmed that this weekend’s Sea To Sky gondola collapse was the result of vandalism.

The haul rope, which had a diameter of 55 millimetres, was intentionally cut, for reasons unknown.

Thankfully, the gondola, which consists of 30 cars, was not operating at the time.

Squamish RCMP believe that the perpetrator hiked the nearby trail and then climbed a maintenance pole to access the haul rope.

So what happens now?

First, the gondola will, of course, be closed for an extended amount of time.

That affects Squamish’s tourism industry, as the gondola is one of the city’s landmarks. Made worse is the fact that there’s still nearly a month left of the summer.

Private events, including weddings, were forcibly cancelled, although Sea To Sky is assisting in relocation efforts.

RELATED: Squamish Trys To Ban Camping In Cars and Tents With New Bylaw

Furthermore, the staff of nearly 200 will more than likely see their jobs affected.

“There’s no doubt that the gondola really helped put us on the map. It has attracted people from all over the world”, said Squamish Mayor Karen Elliott.

The property damage of the incident, alone, is estimated to be at least $1 million.

In a statement, the company said that an estimated 18 to 20 of the total 30 cars will need to be replaced.

The main cables, also know was the “haul rope”, will also need to be replaced.

RELATED: “The Beast” at Playland Malfunctions, Drenching Riders In Fear and Oil

Sea To Sky is currently working with manufacturers determine a timeline for replacements and repairs.

“We appreciate all of the support from the Squamish community and the industry as a whole during this time”, the company said.

Several questions have been answered. The biggest one, however, remains: Why would somebody do this?

Sea To Sky Gondola has announced that the clean-up process has begun and that they expect to re-open in Spring 2020.

In addition, according to CTV News, 75 members of the season staff have received early layoff notices.

For more news pertaining to your community, check out our dedicated Cities page.