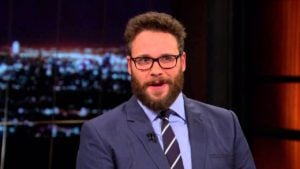 Vancouver’s Seth Rogen had no problem telling off some of his followers, after they criticized the Black Lives Matter movement.

The Pineapple Express actor posted a photo on Instagram, Monday, that said “Black Lives Matter.” And underneath the image, he added, “if this is a remotely controversial statement to you, feel free to unfollow me.”

Then when several people commented with the phrase, “all lives matter,” or criticized those involved with the riots, Rogen told them off.

“F*** off. You don’t deserve my movies anymore. Stop watching my s***,” the actor said to one comment about the riots.

If this is a remotely controversial statement to you, feel free to unfollow me.

Many people respond to the movement with “all lives matter,” because they think the phrase suggests that “only” black lives matter.

“Instead, it’s simply pointing out that black people’s lives are relatively undervalued in the US — and more likely to be ended by police — and the country needs to recognize that inequity to bring an end to it,” explains a Vox article.

Rogen recently donated to help bail out Minnesota protesters. There are many charities to donate to  during this time, including several Canadian groups.