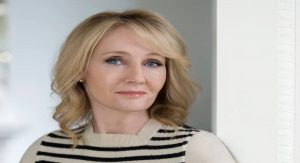 Author J.K. Rowling is threatening to take legal action against a Coquitlam transgender activist, over a Twitter conversation.

The Harry Potter writer implied there may be a lawsuit directed at the activist for saying Rowling was not to be “trusted around children.”

Activist, and former BC Green Party candidate, Nicola Spurling had tweeted an article from the Guardian with the above caption.

This turned into a heated conversation, where Spurling called Rowling transphobic.

“Unless you want to hear from lawyers, you might want to rethink that tweet,” Rowling replied. “I’m not wasting time arguing with wilful misrepresentations of my views on transgenderism – your timeline shows you’re not big on truth – but making serious insinuations like this comes with consequences.”

Spurling replied back with, “If you feel that the transphobia you’ve put into the world is not dangerous to children you are more than welcome to have your lawyer send me a cease & desist letter.”

This isn’t the first time Rowling has come under fire for transphobia. In December, she tweeted support for a researcher whose transphobic views lost the woman her job.

There have been other instances where Rowling had reportedly liked comments from anti-transgender groups.

On the advice of her lawyers, Spurling said she has since deleted the original tweet.