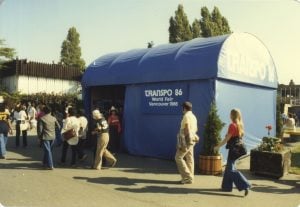 No World Fair has ever been as iconic as Vancouver’s Expo 86. We offer you a trip down memory lane with this rare footage of Expo 86, the legendary fair that helped shape Vancouver as we know it today.

It proudly boasted 65 pavilions across the 173 acre site, as well as a monorail that smoothly sailed along over the crowds, stopping at each zone. Access to the Canadian Pavilion was through the newly constructed Skytrain, the transport that is now an essential part of Vancouver.

The pavilions were divided into six coloured zones, each holding their own rides, cuisine, theatrics, and pavilions. The pavilions flaunted a variety of exhibits, from Egyptian artifacts, global delicacies, to the Kirov Ballet and Bryan Adams. Expo 86 also hosted a range of well-known faces, including the timeless Princess Diana, Jacques Cousteau, Pierre Trudeau, and Margaret Thatcher.

Some of the pavilions that were featured in Expo 86 stuck around and can be seen to this day. Some of the more recognizable ones are Science World, the China Gate, and Canada Place.

The five and a half month legacy was the second time Canada had held a World Fair, the first being Expo 67 in Montreal. It was also the last World’s Fair to ever be held in all of North America. More than 22 million people overall attended Expo 86, with almost 80 per cent of Vancouver’s population attending in one day.

It most notably struck a spark of change that formed the industrial cityscape that Vancouver is today. Expo 86 shone a spotlight on Vancouver that caused a huge population growth, an influx of globalization, and eventually, a housing increase.

The World Fair harboured a strong sense of nationalism and significant progress for Vancouver, and 24 years later, another global event was held in the same location.