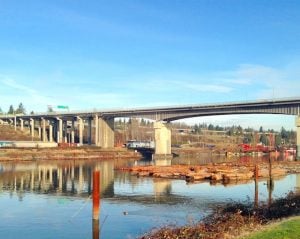 The Queensborough Bridge: for many residents of Metro Vancouver, it’s one of the most frustrating parts of their early morning or evening commutes.

New Westminster’s Queensborough Bridge was built in 1960, and cost $4 million dollars to construct. Back then, it saw staggeringly less traffic and was fully capable of serving as an efficient route across the Fraser River’s north arm. It’s also important to note that it was a toll bridge until 1966, before being bought by the provincial government.

#TBT An aerial view of the Queensborough Bridge, looking north towards #NewWestminster, circa 1960 around its opening day. #newwest pic.twitter.com/cBYyH86Cpd

After receiving an upgrade in 2008, the four-lane bridge has turned into a primary connector for Queensborough residents and is relied upon by thousands of motorists daily.

But just like its neighbor, the Pattullo bridge, the crossing is outdated.

In October police spotted smoke billowing out from underneath the bridge, and they found a fire that was caused by a high voltage cable that failed. As a result, the bridge was closed and led to major morning chaos for thousands of commuters.

The blow was just one of the most recent examples of how important the bridge is to Metro Vancouver, but make no mistake, with or without a rare accident, the bridge is still problematic.

The Queensborough Bridge is a life ruiner. Even if you don’t have to cross it. You can’t escape. #NewWest

With major delays occurring almost daily on the bridge, a number of solutions have been proposed.

One of the proposals to the Queensborough madness was a ferry that connected the New Westminster Quay with Queensborough. The ferry ran a pilot throughout the summer, and many local residents and visitors really appreciated having the commuting option. Indeed, for locals it made the crossings much quicker.

With this in mind, the ferry can only hold a certain number of passengers, and therefore it can’t make a major contribution to the issue. In addition, many of the travellers who use the bridge are carrying on downtown or to other areas, and therefore it wouldn’t make sense for them to leave their vehicles behind.

Some have put forward the idea of adding additional lanes to the bridge, which as most can imagine could be a very complex and complicated option.

Others have suggested replacing the bridge, but that option would cost a great deal of money and may force the government to reinstate the tolls.

Regardless of the outcome, the local population continues to grow and pressure is mounting to address the bridge.

What do you think should be done about the Queensborough congestion? Do you think that the ferry service is a good idea? Should it be replaced?