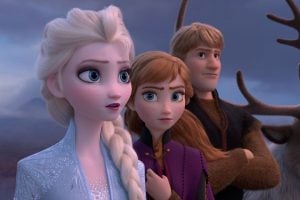 November is here, and it’s quite the month if you’re a big fan of movies.

Here are the 5 must-see movies of the month.

This is the main movie event of the month. The Irishman is legendary director Martin Scorsese’s first narrative film since 2016’s Silence. Furthermore, the mobster epic will see legends Al Pacino (playing Jimmy Hoffa) and Robert De Niro (playing Frank “The Irishman” Sheeran) reunite on-screen. This will be Pacino’s first time working with Scorsese, whereas De Niro is a frequent collaborator of Scorsese’s, most notably in the cult-classic Taxi Driver.

Directed by James Mangold, whose previous film was the acclaimed Wolverine send-off Logan, Ford v Ferrari details the historic rivalry between Ford and Ferrari (obviously), both on and off the racetrack. Matt Damon plays Carroll Shelby, a designer an engineer for Ford who played an instrumental role in designing the Ford Mustang. Christian Bale, of The Dark Knight and Vice fame, plays a professional race-car driver for Ford.

Frozen was a phenomenon when it was released in 2013 (and now available to stream on Disney+), and even to this day, it’s difficult to say the words “let it go” without anybody making a Frozen reference. Idina Menzel and Kristen Bell return to voice Elsa and Anna and the story picks up three years after the events of the first film. Evan Rachel Wood, of Westworld fame, plays Queen Iduna, Elsa and Anna’s mother.

Knives Out centers on a murder-mystery that occurs during a family gathering. That’s a timeless premise for a movie, but the real draw here is the cast. It features Daniel Craig, Chris Evans, Michael Shannon, Don Johnson, Jamie Lee Curtis, Toni Collette, as well as Lakeith Stanfield (Sorry To Bother You), Ana De Armas (Blade Runner 2049), and Katherine Langford (13 Reason Why). On top of that, Knives Out is directed by Rian Johnson, who directed Star Wars: The Last Jedi.

As in previous months, here’s a under the radar selection. Marriage Story tells the story of a stage director, played by Adam Driver (Kylo Ren in Star Wars: The Force Awakens) and his actress wife, played by Scarlett Johansson (Black Widow in the Marvel Cinematic Universe) as they go through a divorce. Laura Dern and Ray Liotta play supporting roles, and the film is directed and written by Noah Baumbach.