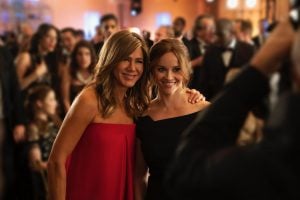 The service, which went live November 1st, costs $5.99 in Canada.

At launch, the service includes a very small catalog, with Apple hoping that the star-power they’ve gathered will help consumers overlook the lack of a backlog.

For the moment, these are the 4 shows Apple is betting on.

Premise: The Morning Show is a workplace drama centered around a Today Show-like show after one of the anchors, played by Steve Carrell, is accused of sexual misconduct. (The Matt Lauer parallel is not subtle.) Reese Witherspoon, who produced the show for Apple along with Aniston, plays a rival reporter.

Interesting Note: Even if you tuned into The Morning Show somehow not knowing that it was produced by Apple, you would likely pick up on it watching the show considering the pervasiveness of Apple products. (Unlike other shows and movies, the logos are not covered.)

Premise: Starring Jason Momoa (Aquaman, Game of Thrones), See takes place in a distant future where mankind has lost the sense of sight. That changes, however, when a pair of twins are born, both of whom can see.

Interesting Note: See was filmed entirely in British Columbia, in places such as Vancouver Island and Campbell River. (As you might have heard, Jason Momoa has been spotted around Vancouver multiple times this year.)

Premise: Dickinson follows famous poet Emily Dickinson as she comes of age in the 1800s. Dickinson is played by Hailee Steinfeld, who’s been in the Pitch Perfect series, voiced Spider-Gwen in Spiderman: Into The Spiderverse, and is also a popular pop artist.

Premise: For All Mankind takes place in an alternate universe where the USSR beats the United States to the moon, thus extending the “Space Race” of the 1960s.

Interesting Note: The series was created by Ronald D. Moore, known for his work on Star Trek, Battlestar Gallactica, as well as The Outlander.

All in all, the catalog is not comparable to Netflix, or even Hulu and Amazon Prime. Each of the four series have aspects that were obviously chosen to appeal to specific demographics that Apple wants to target. None of the shows, however, have been particularly well reviewed.

Yes, Apple TV+ is cheaper than Netflix, but that’s because any price higher than that would have likely drawn criticism. A 7-day free trial is available to those who want to give it a whirl, and 1-year subscriptions are also included with the purchase of new Apple devices. (There are other shows currently available, and more are on the way.)

Content aside, Apple TV+ will likely grow pretty quickly, in terms of users, based just on the fact that Apple already has billions of their devices out in the world, significantly lowering the barrier of entry.

Only time will tell.