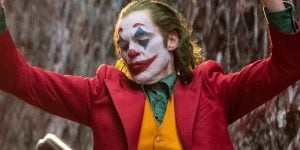 Fall is one of the best times of the year for movies, and this year is no different. When the weather outside gets frightful, duck into a movie theatre and grab some popcorn. And to help you decide what to watch, here are the 5 new movies that everyone will be talking about this October.

We’re starting off strong. Following Heath Ledger’s now-legendary performance as the Joker in The Dark Knight, taking on the role of Batman’s archenemy has been a losing proposition, in a “you just can’t top that” kind of a way. However, if there’s anybody who can do it, it’s probably Joaquin Phoenix, one of the best actors of his generation. Joker, an origin story, is garnering praise from critics left and right, and all signs are pointing to it living up to the hype. The film also stars Robert De Niro, whose The King of Comedy served as a huge inspiration for Joker.

Lucy In The Sky

This film is probably the film on this list that has received the least amount of publicity, but there are a lot of signs that it will be one to watch. For starters, it’s written and directed by Noah Hawley, in his Big Screen debut, who created, wrote, and directed on the anthology series, Fargo, as well as Legion. The film follows Natalie Portman’s Lucy, an astronaut who returns from space and can’t reach the same highs she did in space. The film also stars Jon Hamm, as well as Zazie Beetz (who’s also in Joker.)

In the immortal words of Jesse Pinkman: “YEAH, b****!!” In case you missed it, we’re getting a Breaking Bad movie. It’s written and directed by the original creator, Vince Gilligan, who also created the Better Call Saul spin-off, so there’s every reason to believe we won’t be disappointed. The film will be centered around Aaron Paul’s Jesse Pinkman directly following the events of the Breaking Bad finale. Mike Ehrmantraut, Skinny Pete, and Badger, are all confirmed to make appearances. The most important question, however, is: What happened to Walter White?

If you think Jojo Rabbit is an animated children’s film, you’d be sorely mistaken. It’s more like the opposite, as it’s about Nazi Germany. Specifically, it’s a dark comedy about a young boy in Hitler’s army who discovers that his mother is providing asylum to a Jewish girl. The film is directed by Taika Waititi, who received tremendous praise for the sense of humour he injected into Thor: Ragnarok, so while this isn’t a children’s film, expect to laugh.

This one is probably one you haven’t heard of, but Parasite has a good chance of being one of the new movies that film critics and film geeks will be talking about not only in October, but next year during Oscars season. It took home the prestigious Palme d’Or award at this year’s Cannes Film Festival, making it the second Korean film to win the award via a unanimous vote. It’s directed by Bong Joon-Ho, famous for directing (English) cult-classics like The Host, Snowpiercer, and Okja. Parasite is a dark-comedy thriller that centers on parasites, of the human variety.