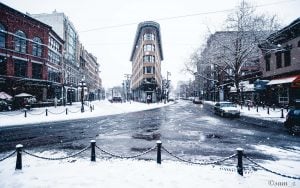 The snow is back, and it looks like it’s planning on staying the rest of the day in Metro Vancouver, according to Environment Canada.

A snowfall warning was issued just before 5:00 am this morning, announcing that anywhere between 5 to 20 cm of snow is expected by the end of the day.

That snowfall warning applies to:

Snowfall amounts are expected to vary depending on local elevation, with those closer to the interior expected to be on the higher end. The snow will likely then subside by tomorrow, where warmer air is expected to turn precipitation into rain.

Winds across Metro Vancouver are expected to be cold, “but not truly Arctic”, Environment Canada says.

We were hit with quite the snowstorm back in January. This doesn’t look quite as bad (especially compared to what Newfoundland got) and extensive, but hopefully everyone was more prepared this time around.