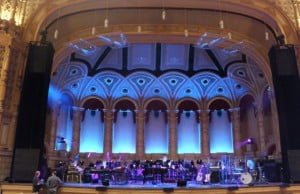 The Orpheum Theatre, which is located down Granville Street, is surely one of the city’s great venues.

Since opening in the late 1920′s, it has played host to a variety of performers.  However, this theatre does have a history that many are not aware of.  There is thought to be an acrobatic ghost that haunts The Orpheum.

There have been numerous ghost sightings, with majority of the reports indicating that people have seen a presence that appears every so often and quickly vanishes. The presence of this  “sprit”  has been seen many times over the years.

The “sprit”  is thought to be that of an acrobat that during a vaudeville act, died by accident, and has been wondering The Orpheum ever since.