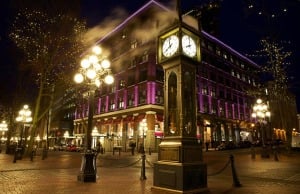 In the spirit of Halloween, we’ve compiled a list of events taking place around the city. As a bonus, we’ve designed the special list below for all the brave and adventurous Vancouverite’s out there looking for an extra thrill this Halloween. The top 7 haunted places in Vancouver below all have rich history, and possibly may deliver more of a thrill you were initially looking for..

Also known as Hotel Vancouver, this historic hotel is notable for its architectural beauty, including copper roofing and gargoyle statues. It’s also really haunted. Its elevator is said to make unscheduled stops on floor 14, and when the doors open, a lady dressed in red floats down the hallway, apparently to a ledge no one can see.

The Lady in Red has also been encountered in some of the guest rooms. Once, a Japanese family that had checked into a room on the 14th floor called down to the front desk to ask whether their accommodations had been double-booked. They described seeing the Lady in Red in the room, which had caused their confusion. In another incident, a bellman who was escorting guests into room 1403 saw the Lady in Red follow his guests through the door into the room. When he followed in to check things out, the Lady in Red had vanished.
Read more

A lot of people have reported ghost sightings near the stadium, lake and forest area of Burnaby Central park. Although there’s no video online, the paranoral society confirmed there was even a ghost caught on camera. Reports also claim people claiming to hear a woman screaming throughout the park. The story on the streets is a woman lost her children in the park, and when she went looking for them in the forest, she never made it out.

Gastown can be quite the creepy place at night, especially when there’s no one on the streets. Many have shared their freaky encounters, but it gets really freaky when experiences repeat. One of the more popular stories is of a man wearing a hat and following guests until their door at the Bodega Hotel. Another tale includes the Hotel Europe manager, who time to time saw a man in strange clothes through the security mirror, and when he went out to check, no one was there.

The Vogue Theatre is home to the spirit of a dark haired and severe looking young man who has been encountered mainly in the working areas of the premises – on the stage, on the catwalks, in the projection booth and in the downstairs (i.e., basement) hallway. He has also been seen in the main audience level, close to the stage.

There are few staff members of the theatre who have not had some sort of experience with the ghost. Many have felt his presence in the narrow corridor downstairs, which they jokingly refer to as the “Haunted Highway” on account of its inherent creepiness and the presence of the ghost. From time-to-time, the spirit also makes banging noises and slams doors. Read more

The Ghostly Hitchhiker of UBC – 16th avenue west
The UBC hitchhiker ghost story is based on an urban myth known as the “Vanishing Hitchhiker.”  In this particular urban legend, a hitchhiker is seen in the headlights of a car travelling by night.  Often, it’s a young woman in a white dress.  The motorist, apparently not concerned by the prospect of picking up a stranger on a lonely road at night, stops and offers the hitcher a ride.  They drive off, sometimes with the hitchhiker sitting in total silence in the back seat.  At some point in the narrative, the passenger mysteriously vanishes. Read more

A Vancouver estate built for late politician and war hero – General Alexander Duncan McRae. McRae lived and died in the house, and since then, it’s been known as one of Vancouver’s top haunted houses. Ghosts living in the house are said to be General McRae (dressed in his First World War uniform), and his wife. The home was also used as a veterans hospital during the Second World War. Reports claim people passing by the home have heard sounds of a crying man.

Last but not least, the Waterfront skytrain station. Any given night, the old building is known for giving off a creepy vibe. In recent history, security guards at the station have reported ghost sightings a numerous amount of times, most which state they saw an old lady walking around asking for help and a young women dancing in the corridors.