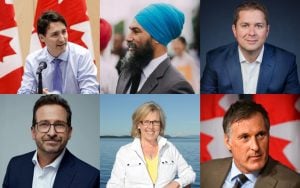 Canada’s top political job is on the line this election, so now’s a good a time as any to examine the candidates that could become our next Prime Minister.

When it comes to the candidates, it boils down to this question: Who are you?

To understand each of them, let’s look at one of their controversies and identify what it tells us about them. In alphabetical order (by last name):

In early September, as climate activist Greta Thunberg was rising to fame, Maxime Bernier hopped on Twitter to tweet about Thunberg, saying she’s “clearly mentally unstable. Not only autistic, but obsessive-compulsive, eating disorder, depression and lethargy.”

Even disregarding the fact that Bernier is 56-years-old and Thunberg is 16-years-old, the tweet symbolizes the perception that Bernier wants to be the Donald Trump of Canada. The parallels extend beyond the use of Twitter. Bernier promises to remove Canada from the Paris Climate Accords, abolish foreign aid, and limit immigration.

In early October, the Bloc Québécois came under fire for comments party leader Yves-François Blanchet made during the French-language debate. That statement called on supporters to vote for candidates “qui vous ressemblent”, which translates to “who look/are like you.”

Blanchet, obviously, is not a racial minority. So as one might expect, his statement was widely criticized for being racist and exemplary of the party’s dog-whistle politics. A Bloc spokesperson explained that the statement was speaking to supporters “that want a Quebec that is secular, green, welcoming, prosperous and French”, which only confirmed the perception that the Bloc only cares about Quebec.

Elizabeth May: Green Party of Canada

In late September, internet sleuths discovered that a photo of Elizabeth May had been photoshopped to replace a single-use paper cup with a reusable cup and metal straw.

All reports indicate that Elizabeth May did not photoshop the image herself. However, it encapsulates the perceptions of the Green Party: it cares about climate change and green initiatives above all else. That’s not a knock in and of itself. Climate change is an undeniable issue. However, the perception of the party, and its leader, is that it remains to be seen what they can do regarding issues outside of climate change.

In January 2019, Jagmeet Singh found himself under fire for a TV interview he participated in. China’s Canadian Ambassador Lu Shaye had accused Canada and its western allies of white supremacy for demanding the release of two Canadians detained in China. When Singh was asked about the incident, he appeared unaware of the event, despite it being a big story.

This does not rise to the level of a scandal. However, it’s nonetheless controversial, in the sense that it’s a point of debate among critics, as well as NDP supporters. Regardless of whether or not Singh heard the question clearly, the perception is that he could’ve handled it better, as opposed to responding with “Sorry, who accused who of white supremacy?” Critics point to this as a sign that while on the rise, Jagmeet Singh still has a ways to go.

In late September, it was revealed that Andrew Scheer’s claim that he worked as an insurance broker in Regina in the past, was false. In fact, he worked at an insurance office “supporting the whole team […] answering questions from customers and clients and doing preparatory work” instead of being a broker, for less than a year.

This padding of his résumé might seem inconsequential, until you examine the reasoning behind it. Pundits believe he did it because voters do not like political “lifers”, so he wanted to project an everyman image. “He was hiding the truth, that he spent his adult life in politics, mostly on government pay”, says some. “That’s pure Scheer, trying to pass himself off as a Westerner even though he was born and raised in Ottawa and will spend his adult life there.”

In September, TIME magazine obtained photographs of Justin Trudeau donning brownface during a party while he was a teacher at West Point Grey Academy in Vancouver. Additional photos were subsequently uncovered of Trudeau in blackface.

The SNC-Lavalin Scandal was bigger, but it’s really the brownface/blackface revelations that gives us insight into the current PM. It’s not what you think, though. We’ll leave the verdict to you of whether or not Trudeau’s actions indicate he’s a racist, but assuming not too much has changed (he was a grown adult at the time of the photos), what it clearly tells us is that his judgement is questionable, at best.

Now, however, the judgement is yours to make on these 6 Prime Minister candidates.