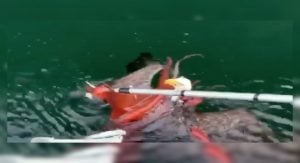 An eagle and octopus were caught on tape battling each other last week off the coast of northern Vancouver Island.

Staff members at a fish farm in Quatsino were working when they saw a bald eagle trapped within the octopus’s tentacles.

The two were floating in the water when John Ilett and his coworkers saw and filmed the incident.

“They were grappling and struggling in the water,” Ilett told CBC. “The thing dwarfed the eagle and completely wrapped it up.”

Our staff at our Mahatta West farm in Quatsino rescued an eagle that had bitten off more than it could chew when it tried to catch an octopus. They are used to seeing the wonders of nature around them on a regular basis, but they knew that this was a once in a lifetime experience. The octopus swam away unharmed and the eagle recovered on a branch for around 10 minutes before it flew away. #nature #rescue #octopus #eagle #bc #quatsino #animalrescue #wondersofnature #giantoctopus #camplife #baldeagle #baldeaglesofinstagram #unexpected #wildlife #wildlifeonearth

At first, the crew didn’t know what to do. But they eventually grabbed a pike pole and pulled the tentacles off from around the eagle.

The eagle quickly flew off as soon as it could, landing somewhere a little distance away. It stayed there for about 10 minutes before flying away.

The octopus dove under the water right after. Both animals went their separate ways.

“I’ve been out here for many years and I’ve seen a lot of stuff, but this ranks up there with one of the coolest for sure,” said Ilett.

This isn’t the first time Canadian nature has gotten feisty: two bears were caught brawling in the middle of a BC highway this fall. There was also footage of a moose getting salty in a B.C. man’s garage. 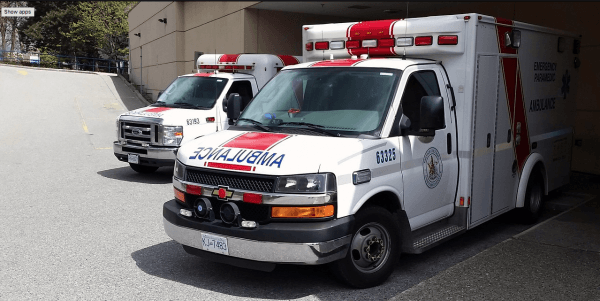