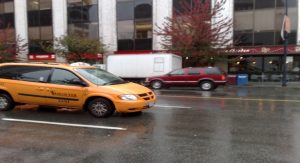 Accessible taxis are more expensive to operate than standard vehicles, so companies usually offer incentives to those who drive them. But Uber and Lyft drivers are not obligated to have accessible vehicles.

Therefore, cab companies are saying it’s unfair. Their belief is if ride share vehicles don’t have to offer incentives, they shouldn’t either.

But while cabs and ride share companies battle it out, it leaves vulnerable people in the middle.

“I think the taxi company should take a step back and think of the people and not think of their bottom line. They’re trying to keep a monopoly on things and it’s really irritating,” wheelchair-bound Vincent Bull told CityNews.

Bull mentioned it already takes four to five times as long for an accessible vehicle. That’s how he gets around to grocery stores or other places, and taking that away severely affects his mobility.

Since Uber and Lyft began services in Metro Vancouver last week, nine taxi companies have filed injunctions to get the new services off the road.

Meanwhile, the City of Surrey has been implementing tickets to Uber drivers in the area.