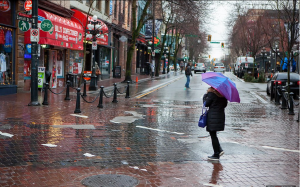 With just five weeks into 2020, Vancouver weather is already breaking records for holding one of the longest streaks of wet days.

The city is on its 29th day of precipitation, which is the longest run since December 19, 1966.

RELATED: Vancouver Is Among Best Places for a Cycling Holiday, But Not For Its Bike Lanes

Vancouver Weather Records showed the dates of the most consecutive rainy days in Vancouver, since records began. And at 29 days strong, we are tied at 10th place, alongside January 8, 1962.

January also broke decades-old records for having the fifth most precipitation in a month. Every day except one saw rain or snow, equalling to more than 250 mm of rainfall.

The heavy rain last weekend also resulted in floods and mudslides in some areas.