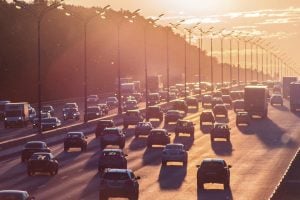 While traffic congestion is growing in most Canadian cities, Vancouver has it the worst.

A recent study looked at 12 cities across the country to see which one had the most congestion in 2018.

RELATED: Almost 2/3 Boards of Directors In Canada Include No Women, Report Finds

According to the TomTom traffic index, a trip around Vancouver takes 39% longer than it would if there was no traffic. And that’s not even during rush hour, where it increases to 50-70%.

The study shows drivers wasted nearly a full week from driving during rush hour in 2019. And the day with the worst traffic in Vancouver in 2019 was September 12th.

In comparison, Toronto, which is second on the list, has a congestion rate of 33%. Traffic in Vancouver and Toronto’s rate increased by 1% from the year prior.

The list of Canadian cities just below Vancouver and Toronto are:

But the good news is, of the 416 cities looked at world-wide, Vancouver places at 40.

The top 10 cities with the worst congestion are:

Vancouver made other lists recently, as the 41st best city In the world as well as the second least affordable city in the world. Hooray for us.